The work you see on these pages explores varied themes. Like most of us I am concerned with our changing environment. The Aurora portfolio along with some images from the Natural History portfolio address the fragility of our environment albeit somewhat obliquely.

Those concerns notwithstanding, the main thrust of my work is to explore the visual appeal inherent in the natural world around me. Taking a photograph is the beginning of a process to find an aspect that alters the perception of the original photograph.

It is a process of discovery as well as creating. The result can sometimes be odd, perhaps beautiful, maybe even frightening, but in the end it is an unabashed appreciation for the visual gifts of nature.

Clyde Lynds’ career in art is comprised of a long list of accomplishments. As a painter he explored the treatment of light and exhibited widely while winning many awards. He later applied his efforts to working directly with light and exhibited internationally becoming known for his innovative concrete and fiber optic sculptures and for his projects with digital imagery on illuminated glass. While his work is in numerous private and public collections, his large scale projects are notable for their integration with architecture and site and include the design and sculpture for the New Jersey State Capitol Plaza, the entry sculpture for the Federal Office Building in New York City and the Montgomery Alabama Federal Courthouse among dozens of others. His large glass project for the entrance plaza to Rutgers University is a precursor of the work you see in his prints.

Throughout his career he has sought to bring original ideas to traditional methods while embracing new technologies for their unexplored possibilities. Photography, a life long interest, developed new possibilities with the advent of digital imaging and its recent advances. Again embracing the new for its untold potential, he has been exploring our relationship with nature through the digital creation of images that border on the just possible. This new work is a thoughtful summation of many of the issues that have intrigued him over the years. They were not voiced until recently because older methods did not permit ideas for manipulating reality to flow as freely as today’s digital tools allow..

Clyde Lynds sculpture, projects and biography can be seen at:
clydelynds.com

All prints are printed to the highest standard of archival quality on archival papers with pigmented inks. The longevity of these pigment inks is equal to or better than traditional silver halide photographic prints. The quality (color, fidelity, detail) of this process now rivals that of the silver-halide gelatin processes and is found in museums, galleries and collections around the world.

Each limited edition print is signed by the artist, numbered and titled on the front below the image. Each comes with a certificate of authenticity noting the title, size, edition size and number of the print.

Contact us at info@lyndsstudio.com for dealers and availability. Prints are sold through dealers only.

The prints are sold with the understanding that Clyde Lynds retains full copyright of the image. Ownership of the print does not constitute copyright ownership or any usage rights other than private display purposes. For inquiries about licensing rights please contact info@clydelynds.com. 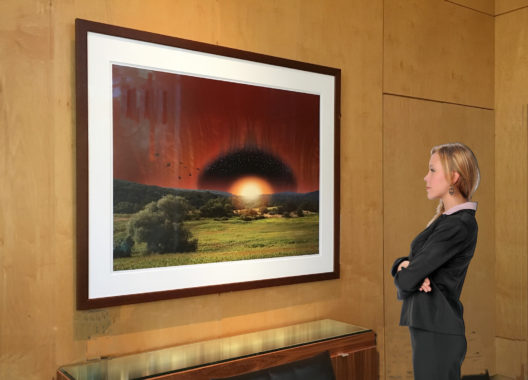